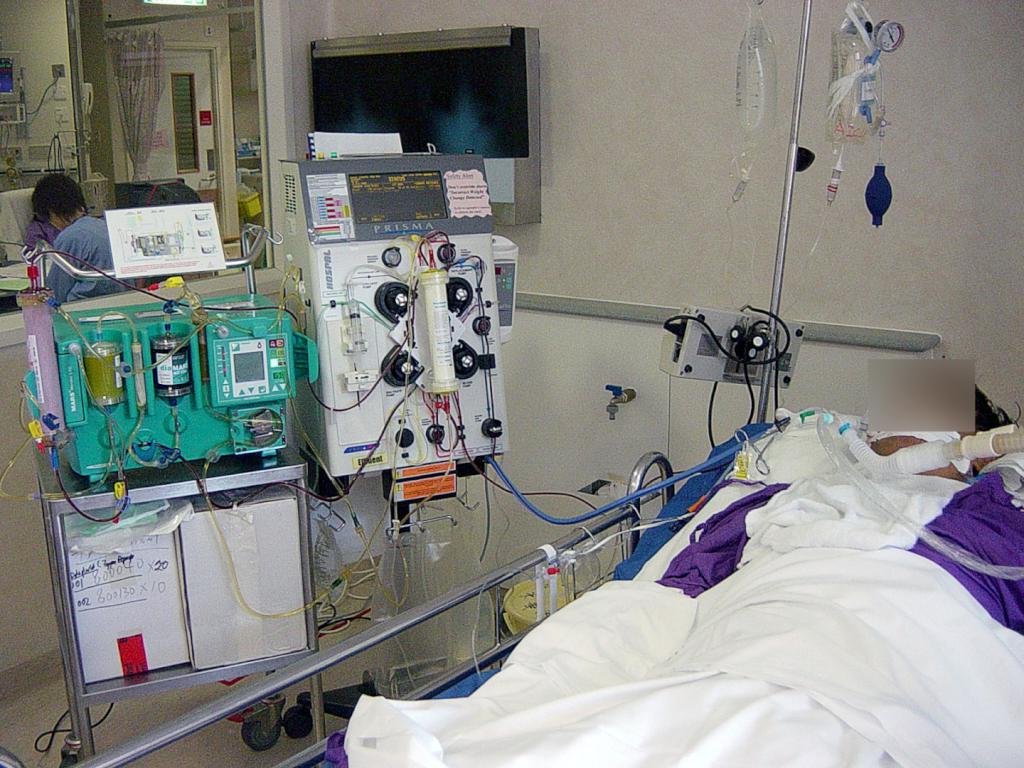 Introduction
Intensive Care Units are constantly consulted by peers, health authorities and even the public about application of liver support technology in patients with hepatic failure. This article serves to provide the readership the official stance and evaluative opinion of HKSCCM on the use of Molecular Adsorbent Recirculating System (MARS), one of the most commonly applied extracorporeal liver support technology as of the latest evidence available.

Background
Molecular Adsorbent Recirculating System (MARS) is a non-biological artificial liver support system developed according to the prototype designed by Stange and Mitzner at University of Rostock, Germany in 19931. MARS is one form of blood purification system that utilizes albumin as dialysate to remove protein bounded toxins in liver failure patients2. The system consists of three interconnected circuits. The first circuit is the blood circuit where patient’s blood is cycled through by a roller pump in an extracorporeal circuit that is dialyzed against an albumin circuit through a specific dialyzer running in countercurrent. The MARS membrane is a synthetic membrane produced by polymer science technology. The technical specification of the membrane is patented and archived within the public domain3. The MARS membrane is a high flux membrane with a molecular weight cut off of 50kD. The pore size renders the membrane impermeable to albumin molecules, essential proteins or hormones. The membrane has an asymmetric configuration, with a tunnel like porous structure over the blood side and a port and adsorption structure over the dialysate side. This unique design allows the transport of bilirubin and other albumin bound toxins, but not the albumin molecule itself, to cross the membrane. Toxins bound to the albumin molecule in blood are released by physiochemical reaction with the albumin-related binding sites of the membrane. These toxins then traverse the membrane by means of a non-energy dependent process, which is similar to the transport of bilirubin molecules along the sinusoidal membrane of the hepatocytes. The toxins are then taken up by the albumin in the dialysate side. The toxin load albumin dialysate passed through two cleansing cartridge to remove the toxins adsorbed to the albumin molecules and regenerate the dialysate online for recirculation. The dialysate flow rate is the same as the blood flow rate but in countercurrent. The first cartridge (diaMARS AC250) consisted of vapor activated charcoal which is not coated with cellophane. It is suitable for elimination for low molecular weight non-polar compounds such as phenols and fatty acids. The other cartridge ( diaMARS IE250) consisted of ion- exchanger resin column and it functions to remove anionic molecules such as bilirubin. The third circuit is a renal replacement circuit. The MARS system is compatible with most of the dialysis and hemofiltration machine on market. The renal replacement circuit serves to remove hydro-soluble toxins and urea, as well as regulate fluid, electrolytes and acid bases.

Efficacy of MARS
Claimed benefits of the system are presented in three levels in terms of biochemical, physiological and clinical efficacy.

Biochemical efficacy
In liver failure, the capacity of the liver to remove toxins is diminished. These toxins may be external in origin, metabolic, gut derived or produced as a result of hepatocellular damage. The biochemical efficacy of MARS has been well proven. Toxins documented in literature removable by MARS include conjugated and unconjugated bilirubin, ammonia, aromatic amino acids, tryptophans, short chain fatty acids, bile acids, GABA like substances, nitric oxides and cytokines4.

Physiological efficacy
The physiological benefits of MARS include improvement of intracranial pressure, reduction of portal hypertension and stabilization of hemodynamic parameters. Attenuation of intracranial pressure have been reported in animal studies 5 and one case series involving three patients with acute liver failure cause by hepatitis virus B or paracetamol poisoning 6.
The use of MARS to reduce portal pressure have been reported in one clinical study that demonstrated a significant reduction in hepatic venous pressure gradient which sustained up to a period of 24 hours7. In another study, the portal resistance measured by ultrasound Doppler was demonstrated to have been reduced in patients with end stage cirrhosis 8.
Systemic hemodynamic parameters was also noted to have improved by MARS9 10 11 12. Different studies have demonstrated that MARS treatment increases mean arterial blood pressure and systemic vascular resistance. MARS also attenuate the hyperdynamic circulation commonly seen in liver failure expressed in a reduction in cardiac output.

Clinical efficacy
In most studies, MARS has been shown to remove uremic toxins and reduce creatinine level though this does not necessary translated into a improvement of renal function. For patients with type one hepatorenal syndrome treated with MARS, survival at 30 days was reported to be statistically significant in one study 13, but it should be noted there were only 13 patients involved in the study with 8 patients in the treatment group. In another similar study, survival benefit could not be demonstrated14.
For patients with high grade hepatic encephalopathy treated with MARS, early reports involving revealed a reduction of mortality in the treatment group15. In a large scale randomised control trial, improvement in hepatic encephalopathy grading seen in MARS therapy group was higher and reached faster and more frequently as compared to the standard therapy group. There was however no difference in mortality between the two groups16.
MARS has also been tried for different indications, including to prolong survival17, to bridge to transplantation18, 19 20 and to regenerate functional capacity of the liver to attain spontaneous recovery21. MARS has not been shown to demonstrate a definite survival benefit in none of these situations.
MARS has been used for selected patient subgroups with acute liver failure22 23 24, decompensated cirrhosis25 26 27, post transplant liver failure28 29 30, 31 32, Wilson’s disease33 34 and post-hepatectomy liver failure35 36. In all of these patient subgroups, success of treatment was demonstrated in form of isolated case reports or series only.

Operational consideration
Safety of MARS is confirmed and the treatment is well tolerated by most patients. There have only been few complications reported associated with its use including abrupt electrolyte shift 37, hypoglycaemia 38, and non cardiogenic pulmonary edema39. MARS being one kind of extracorporeal treatment, is also prone to the development of all adverse events associated with this regard.

To date there is no agreeable standardized protocol for MARS. For instance, there is no consensus over the method of anticoagulation40 41 or when should anticoagulation be avoided. There are also no studies to decide on the optimal duration of dialysis42, the modality of renal coupling, dialysate albumin concentration43 and the logistics of termination or resumption of treatment.

MARS is a labor intensive procedures and it requires designated nursing staff to operate and monitoring the system44. Only in centers where adequate manpower planning, on the job training and maintenance of expertise are provided would it be able to support the successful operation of MARS service.

Local experience
Within local scenario, the liver transplant team and adult intensive care unit at the Queen Mary Hospital (QMH) of Hong Kong had the most experience with MARS 45. In this center, MARS was used as an early intervention to prevent deterioration, preferably when patients were not too ill, as in those patients that showed rapid velocity but not necessarily high absolute value in biochemical deterioration, those with grade 2 hepatic encephalopathy or those with hepatorenal syndrome where urine output were still above 0.5ml/kg /hr. It is at this time point that MARS was believed to be able to alleviate organ damage and retard progression of the disease through hepatotoxin removal. On the contrary, if MARS is implemented late in the course of liver failure, the benefit of hepatotoxin removal is minimal compared with the overwhelming cascade of physiological damages brought along by multi organ failure.

Local experience also believed MARS should not be used as a means to reverse liver failure. Although native liver recovery with MARS has been reported in literature and encountered in local experience, it is unpredictable as to what patient will respond favorably. At QMH, the purpose of performing MARS is to stabilize patients’ condition and to bridge them to transplantation -- the only proven effective treatment for liver failure by far. Patients not aiming for liver transplantation undergoing MARS should be carefully explained that only short-term improvement would be expected.

Local experiences also did not support the indiscriminate use of MARS for all patients with live failure. The selection criteria for MARS candidates adopted at QMH include:
1. Potential transplant candidate
2. No immediate life donor within 48 hours
3. Co-morbidity under control, and
4. Able to sustain extracorporeal circuit.
Based on these criteria, roughly around 20% of the patients admitted for liver failure to our intensive care unit will be eligible for the treatment.

Selection of suitable candidates and initiation of MARS at appropriate timing are the two most important factors to improve the success rate of MARS treatment.

Conclusion
HKSCCM does not recommend the routine use of MARS for liver failure patients based on current literature and local experience. MARS should remain as an experimental treatment to explore its capabilities in different clinical situations. The stance will need to be periodically reviewed to reflect the latest evidence.

Since MARS was first launched into clinical application, a great amount of research have been done, with most being descriptive studies and only a handful of randomized trials existed46. Given the lack of concrete evidence to demonstrate survival benefit, it is understandable that clinicians are skeptical to commit to such treatment which is expensive to run, has a complex operative procedure, and most importantly, not without risk. It should be noted however, liver failure is a disease associated with high mortality, and any treatment with potential to alter the outcome, the evidence of such, despite being observational or prone to bias, should not be overlooked and neglected easily.

The lack of conclusive result from randomized controlled trials could be due to fallacies and limitations of study methodology. Heterogeneity of disease involved, availability of transplant options and lack of reliable tool to prognosticate patients or monitor treatment efficacy are all possible reasons that render a good trial on this topic difficult to conduct.

The limited experience associated with local application does not allow HKSCCM to establish clear cut criteria on the indication nor contraindication of its use, let alone the operational details, logistics, or complications associated with the treatment.

Furthermore, limitation of its availability and expertise, high operational cost and shortage of nursing manpower has created an unfavourable condition for the intensive care arena to further pursue use of MARS in local scene. The way forward is to define a conducive infrastructure and environment including resource allocation, training, research and long term development plan in order to establish the cost effectiveness of this and other types of liver support treatment.

Author Disclosure
Both Prof ST Fan and Dr Alexander Chiu had no conflict of interest to declare in association with the manufacturer of MARS.